The Narcissist’s Smear Campaign
can be dangerous to your career.

When you find out about the Narcissist’s Smear Campaign,
it will be too late for any damage control.

If the Narc is on the low end of the Corporate Ladder (Somatic Narcs in general are not well educated and so rarely end up in Management positions), then they will not have the power to fire you. As a work around, Somatic Narcissists become well versed in Back Stabbing and different types of Smear Campaigns.

Somatic Narcissists need to be the center of attention when others are around. IMHO it is best to steer clear of Somatic Narcs and if you can, then just leave the room. Moving out of the Narc’s line of sight, means that they can focus on others and not on ways to entrap you.

Video is courtesy of the Sereena Nightshade YouTube channel

Trusting the wrong people at work,
can be dangerous.

Going as little as possible to No Contact can be the trigger, that gets a Narcissist started on their Smear Campaign.

Back Stabbing is a Narcissist’s specialty.

You will never know when the Somatic Narcissist’s Smear Campaign starts.

If you go No Contact, then expect the unexpected, especially in a place of employment. Not providing a Somatic Narcissist with the Attention (Narcissistic Supply) which they crave, can turn the Narcissist against you. They will inform upper management that they can’t stand working there because you are there. They will smear your reputation. If you ever find out about their Smear Campaign, it will be way too late for damage Control. All that just because you decided to stay the hell away from them and go As Little As Possible to No Contact.

Somatic Narcissists can become
the DESTROYERS of Your Reputation.

Cerebral Narcissists, I have found will not do that. They are smart enough to realize that you will not play their game and will either leave you alone or work to get you fired as soon as possible. Cerebral Narcissists are much further up the Corporate Ladder and “can” get you fired with little effort. No need for a long term Smear Campaign, which would be beneath them.

Somatic Narcissist in general are low level employees, who do not have the education and smarts to climb any Corporate Ladder. They use their physical appearance and superficial Charm to attract Targets.

In my opinion, the worst part of any kind of relationship with a Narcissist, happens when the relationship ends. That is when Narcissists start their Back Stabbing and Smear Campaign directed against you. The damage can be both Financial (at your job), as well as Emotional.

Their Back Stabbing and Smear Campaign is the Narcissist’s gift to you, which just keeps on giving….

I have previously explained some of the forms that the smear campaign takes and also why they are so effective. Now I turn to the six reasons why they affect somebody like you so much. Smear…

Source: The Smearing of the Empath

Narcissist Quote: “The behind your back Smear Campaign, is a Narcissist’s Specialty.“

Narcissists are known for something commonly called “the Smear Campaign“.

They might smile to your face, but behind your back they will run their Smear Campaign against you, to try to destroy you and your reputation.

When you finally learn of the Narcissist’s Smear Campaign it will be too late, as the damage will have already been done.

Video is courtesy of the BA Recovery YouTube channel

Quote: “If you decide to go No Contact, then be prepared to Expect the Unexpected,
from the Narcissist.“

Annabel Lee details Smear Campaigns and what happens when you go No Contact with that Narcissist and how she handled the situation.

The Narcissist is unable to keep their mask for long periods of time. Eventually their mask will come off and people will start to notice it. Have patience and play the “Long” game. Narcissist can fool people in the short term, not so much in the long term when their mask slips off too often…

Annabel Lee’s video gives one hope. She has unfortunately been there and done that with Narcissists. She is also a proponent of going No Contact.

Video is courtesy of the Annabel Lee YouTube channel 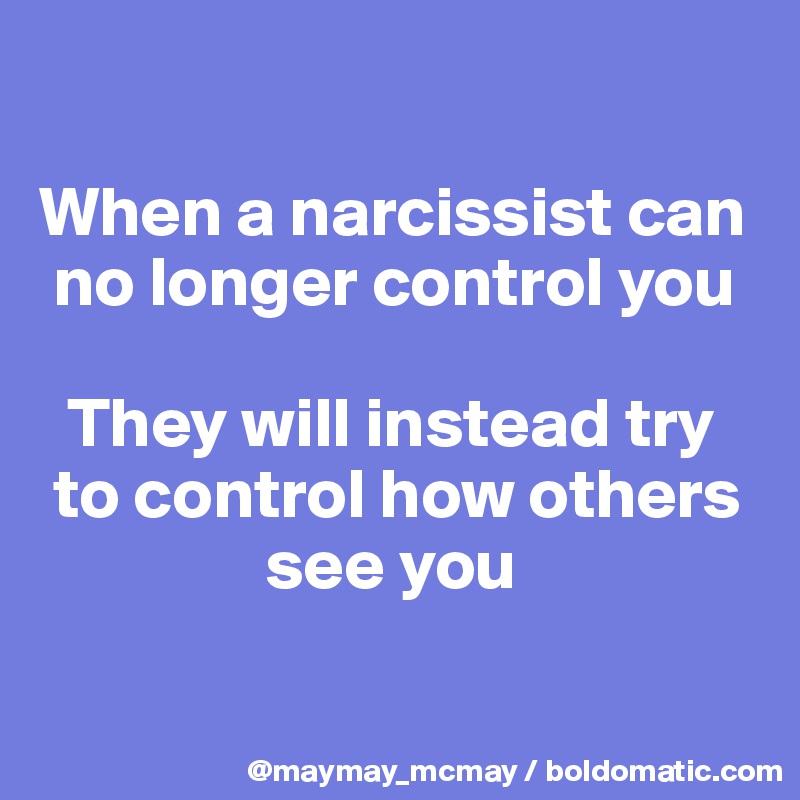 Quote: “When a Narcissist can no longer control you, they will instead try to control how others see you.“

Going No Contact, means the Narcissist can no longer get Narcissistic Supply from you. When that happens, the Narcissist could switch to trying to control how others view you. Never forget that Narcissists work with Stealth, when they start their Smear Campaign behind your back.

Your reputation, especially at a job, is extremely important and as such could become the target of the spiteful Narcissist. After you have dared to Go No Contact with a Narcissist make sure to maintain extra contact with others at your place of work, especially with those in positions higher up the ladder than your job title.

Trying to go No Contact (or as little as possible contact) with a Narcissist could have benefits, but could also create unbelievable problems and issues. There is nothing like finding out that the Narcissist told the people who you report to, that the Narc can’t stand working there because you are there. Of course the Narc forgot to also inform them that the Narc used to constantly tell you that you were oh so Wonderful. The Narcissist could set out to punish you by starting a smear campaign behind your back, when you have the audacity to go as little as possible to No Contact with the Narc.

If you decide to go No Contact, then be prepared to Expect the Unexpected from the Narcissist.

Quote: “Tell me again how you feel that we are Soul Mates and Kindred Spirits. Oh, before I forget, can I ask you a big favor? Whenever you are finished Backstabbing me, could you please remove all those knife blades.”

Not everyone who smiles at you is your friend.

When you go Low to No Contact and stop being a Source of Narcissistic Supply, just watch how quickly the Smear Campaign and Backstabbing gets started by the Narcissist.

Superficial Friendships of Female Narcissists. They gain your trust via a bevy of compliments (like a restrained version of Love Bombing). They want to create a rather nice “Public Persona“.

Later on their mask starts to slip and you find out that they have been covertly saying negative things about you. Yes, they can be quite active at Backstabbing you.

Video is courtesy of the Self-Care Haven YouTube channel

A friend made an interesting comment. It was about a female Somatic Narcissist which we both know.

My friend made a comment that she was much like a Spider. She would create a fine Spider’s Web to trap you in. Once trapped she would do whatever she wanted to you.

She could be devilishly charming, always wanting to be the center of everyone’s attention. She made sure that everyone knew that she was there. She would work at trying to build you up. Love Bombing you with compliments and talk of being kindred spirits.  Eventually the “Discard phase” would arrive with the backstabbing and smear campaign.

The idea of her being like a Spider was interesting.

Narcissists really are like Spiders. They build a web of lies and half truths,  much like a Spider builds it’s Spider’s Web. Once they have their prey in their web, the Spider will feed off it. With the Narcissist you become a Source of Narcissistic Supply, which they will feed on. Eventually they find a new and to them better Source of Narcissistic Supply, so you get discarded. All that is left of a Spider’s prey is an empty shell. Survivors of narcissistic abuse will tell you that they are not the same person that they were before hooking up with their Narcissist.

My friend is not knowledgeable about the DSM-4 & 5 profile of people afflicted with Narcissistic Personality Disorder, but his analogy of referring to this female as being like a Spider was extraordinarily perceptive and in my opinion sadly dead on. She is clearly someone to stay the hell away from.

How to Thrive in a World of Lying, Backstabbing and Dirty Tricks.

This video is a radio interview with Oliver James who is a psychologist, bestselling author and broadcaster. He details the workplace colleagues who have no compunction about trampling over others, or like nothing more than to plot and scheme, or who drone on endlessly about themselves.

Oliver James posits that there are three Dysfunctional Personality types found in the typical workplace: Psychopaths, Machiavellians, and Narcissists.

The following are a few quotes from their very good post:

“It’s totally normal for a person with a Cluster B personality disorder to pathologically lie, gaslight, and smear campaign.”

“Every narcissistic person you know who actively badmouths another person or group without that person or stereotype represented is keeping a major secret from you.”

“Guess what, “Narcissistic Supply Source”? If you think a narcissistic person is trustworthy because of their special interest or attachment to you, nothing could possibly be further from the truth.”

“Narcissistic people get off emotionally and psychologically based on the thought of getting away with something. They only show remorse for their actions when and if they are caught.”

To read the complete post, just click on the photo above or on the Source link below. That will take you to the Flying Monkeys Denied website, which is an excellent resource well worth adding to your Bookmarked sites list.